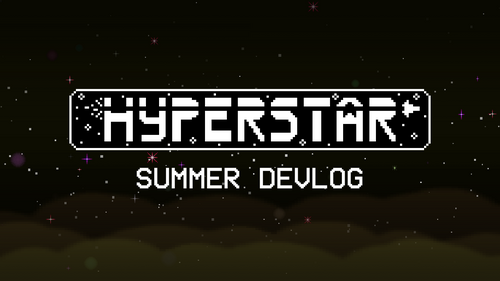 Welcome to the first devlog for Hyperstar! It has been quite some time since the announcement and now would seem to be a great time to break that silence. Up until this point the development of Hyperstar has been behind closed doors but throughout the next couple weeks and months those doors will be opening meaning that you, the community, will be be more involved with the development process. Now that most of the groundwork has been laid for the game, it is time to build up a catalog of arenas to fight in, ships to play as, and enemies to fight against. Throughout the next couple of devlogs there will be more content along these fronts. Enough chatter though - let's cover what has been worked on so far since the announcement of the game!

Score Orbs
One of the most significant additions to the game is score orbs! Rather than points being directly awarded when killing an enemy, score orbs are now dropped all around enemy death locations. These score orbs can be activated by moving your ship close enough to collect them. Be hasty though, as these score orbs will expire if left around too long! These score orbs will not only grant score but will also heal for a minor amount and add charge to a new powerful type of ability. What powerful type of ability is that you might ask? Well, that brings us to the next major addition...

Ultimate Abilities
Ultimate abilities are a brand new type of ability in Hyperstar! Unlike regular abilities these ultimate abilities have no cooldown and instead require energy. This energy is accumulated by picking up score orbs in addition to a small amount being generated over time.  Once fully charged, you can activate your ultimate ability which has powerful effects that can turn the tides of battle. Activating your ultimate does mean consuming all the energy stored however, so make sure to save your ultimate for a key opportunity. Some of the ultimate effects include: sending out a swarm of homing missiles to enemies, engulfing the arena in flames burning all enemies present, freezing the entire arena stopping all enemies in their tracks for a period of time.

The new ice ship special ability is Enhance Weaponry - "Replace your primary and secondary attacks with upgraded versions for 5 seconds". Enhance weaponry will replace your piercing ice shard with a wave of shotgun spread ice shards while replacing your single target freeze ray with a piercing, multi-charge freeze ray.

The new solar ship special ability is Heat Stroke - "Cause all nearby burning enemies to instantly take all their upcoming burning damage". By utilizing the solar ship's arsenal of abilities you can stack up a large amount of burning damage and then instantly deal it.

User Interface Buffs
Many parts of the HUD have been given a facelift including a redesigned score/time panel, cooldown notifications, ability keybindings, ability charges, and many other minor changes. On the menu side of things a brand new interface has been created including a brand new ship selection screen. This new ship selection screen should help facilitate the process of deciding which ship is best for you by showing you its abilities, stats, and difficulty.

The Future of Hyperstar & Roadmap
As mentioned in the introduction of this devlog, going forward there is going to be a new approach to the development process. This includes posting monthly updates about new content being added to the game. I am also looking into doing weekly development livestreams. Some of the features currently being worked on include:

When Can I Play Hyperstar?
Hopefully soon! If all things go according to plan there will be an alpha test where you can try out the game and give feedback. While there is nothing to announce just yet, you can stay up to date by joining the brand new Hyperstar discord channel and checking back here for more devlogs which will include further news on the progress of the alpha build.